The College of Sainte Katherine is one of the oldest active College Campus chapters of the Society for Creative Anachronism. Because the SCA was founded here in Berkeley, the Kates have a unique position in SCA culture. Sort of the puppies of the SCA world. SCA Colleges are traditionally named for a patron Saint. Appropriately to the academic mission of Cal, Sainte Katherine of Alexandria is the patron of scholars.

The Kates have a number of group traditions, formal and otherwise. Although we ostensibly identify with the Golden Bear mascot of the University, we are commonly known in the SCA at large as the Lemmings. When the Kates fight together has a group, our battle cry is “To the Cliffs!” I have no idea how this came to be.

Another tradition in the Kates is “The Key.” The official badge of office for the Seneschale – the leader – of the Kates is a large brass key decorated with numerous braided ribbons. Each ribbon represents a former Kates Seneschale. Upon stepping up to office, a new Seneschale must be able to recite the name of all the predecessors in order. This is referred to as “reciting the Key.” The Seneschale who is stepping down and passing on the key must be able to recite the Key backwards. Tradition calls for the Seneschale to be wearing the Key at all times when in garb and/or at events. In the course of any given event, any member of the Kates can approach the Seneschale once and request a recitation of the Key. Anyone who hears the recitation cannot ask to hear the Key again until the next event. This is one of the favorite ways for the Kates to harass the Seneschale. Potential office holders, consider yourself warned.

The nature of how the Kates run themselves can best be understood with through the postings of meeting minutes and event notes we keep on an almost-consistant basis. After preparing yourself mentally with a little silent meditation, feel free to peruse the evidence by joining the Kates mailing list. 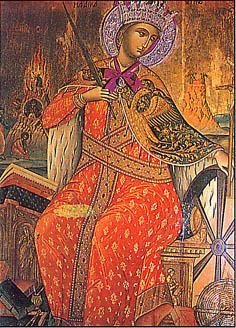 “The all-blessed bride of Christ
let us extol in song,
Katherine the divine and protectress of Sinai,
the
assistance and helper of all of us;
for she muzzled brilliantly, the ungodly
clever men,
by the power of the Spirit.
And now crowned as Martyr, she
pleads great mercy for all of us.
(Plagal of the 1st Tone)”
– Apolytikion
of Saint Katherine the Great

Sainte Katherine is the patron saint of scholars. She lived in Alexandria,
Egypt, during the fourth century A.D. The daughter of the ruler Constantus,
she was given the finest education. She spoke several languages and
was a great supporter of the Christian faith. Katherine was said to
have been beautiful, statuesque, and unequaled in kindness. She refused
all proposals of marriage; saying that the man she married must be young
and equal to her in the four virtues that were attributed to her: compassion,
wealth, wisdom, and beauty.

Katherine’s mother was
concerned about her daughter’s beliefs and took her to seek the advice
of a saintly hermit. After listening to her story, he said, “I know of
a magnificent man who surpasses you in all ways.” Wanting to meet this
man, Katherine asked who his mother was. The hermit gave her an icon of
the Theotokos and told her to pray to the icon through the night adding,
“If you are worthy of Him, and if you approach Him in faith, His mother
will allow you to see Him.”

That night, the Theotokos and Christ appeared
to Katherine, and the Lord placed a beautiful golden ring on her finger,
saying, “Today I make you my bride, and for ages to all ages. Hold this
joining sacred and never take unto yourself another bridegroom.”

By the age of 18, Katherine began to debate the great minds of Alexandria. She
challenged all pagan philosophers in public debates and defeated them
soundly. As her fame began to spread, the Emperor Maxentius sent an edict
that all people throughout the empire should support his reign, worship
his gods, and turn from the popular Christian religion. Katherine, of
course, refused. Maxentius tried to persuade her to abandon her faith
with a tribunal consisting of 150 philosophers. When the philosophers
failed to make her renounce Christianity, she was imprisoned. While in
prison, she converted the empress and many soldiers. Maxentius eventually
sentenced her to a deadly torture known as “the wheels.” When Katherine
was placed in the device with sharp blades, the wheels broke loose and
killed many pagans. For this reason, the torturer’s wheel has served as
a symbol for Saint Katherine and is often depicted in her icons.

Maxentius eventually ordered Katherine to be beheaded. Her death occurred
on November 25th near the year A.D. 311, and her body is said to have
been lifted by heavenly angels and taken to Mount Sinai. A band of monks
later discovered her body and built a monastery near the spot of the
discovery. Relics of Saint Katherine are enshrined in the monastery
of Saint Katherine on Mount Sinai; Sainte Nicholas Church, Kato Patessia,
Athens; and Zerbitsa Monastery, Sparta. There have been more miracles
attributed to Sainte Katherine than any other saint of the Church.

The feast day of Sainte Katherine is November 25. The tradition for name
days began in the first century when Christians prayed to God on the
anniversary of a martyr’s death, thanking God for the martyr’s example
and asking Him, through the martyr’s intercession, to guide and direct
their lives.