Arts and Sciences refers to everything that we do in the Society for Creative Anachronism that calls for documentation from our target period. That’s just about everything. To name only a few: music, dancing, costume construction, embroidery, metalsmithing, tentmaking, cooking, writing (poetry or prose, in period style), playing games, woodworking,…the list goes on, ad infinitum.

The SCA tradition most easily identifiable as medieval to the outside observer is Heraldry. This is the Art and Science of documenting and creating unique devices, or Coats of Arms, to represent individuals, groups, or offices. The SCA has its own set of rules for creating a device, and a compendium of device styles already in use by individuals and groups in the SCA all over the world. Behold the Kates’ Device, informally known as the Flaming Nut:

Formally, the “Flaming Nut” is described in blazon as “Azure, a flame proper atop an acorn within a laurel wreath within a bordure engrailed Or.”

For those interested in learning the art of Heraldry, we Kates are lucky enough to be in close proximity to Bratchet, a weekly meeting of local heralds where device designs from other geographical areas in the SCA are analyzed as a part of being considered appropriately medieval. Duke Frederick of Holland, also known as Flieg, who is a ‘special catagory’ of Kate, hosts this meeting every Wednesday starting at 7:30 PM or so. We Kates also have our own personal Herald, Felix MacAvady. If you are interested in Heraldry, please get in touch with him to find out how you can learn more.

We gather occasionally to work on costumes (although the College can provide loaner garb, most people want their own). At these gatherings, people can give you the help you need with design and construction, or can at least tell you where to go for such help. The college owns a variety of period patterns; ask about them at the next gathering!

If you are interested in making some period garmets here are some patterns:

An important part of historical recreation in the SCA is, like in every part of life, food. In general, food at non-feast events should be at least minimally appropriate; cheese, bread, fruit, roasted meats, cereal dishes are all simple ways to maintain the appearance and feel of really eating in the middle ages. Commercially packaged foods and drinks are discouraged, and everything should be served and consumed on appropriate period tableware.

Those interested in period-style cooking spend a great deal of time researching recipes and techniques. A list of such recipes will be posted on this page in due time.

My beloved is with me, along with cups of unmixed wine,
so pour and fill them for me.
It is a pleasant life, and a site for pleasure
like a bride, when she is unveiled!

Experience the cultural luxuriance of Spain in its Golden Age as we celebrate
the wedding of a wealthy Moslem merchant living in Toledo of the year
592, or 1217 by the count of those who worship the son of Mary and 4974
to the children of Israel. The College of Ste. Katherine has prepared
for all the wedding guests a sumptuous feast, as well as diverse entertainments
such as dancing, music, and poetry. The event will take place on Sunday,
the 3rd of March at the Alumni House on the UC Berkeley Campus, Berkeley,
California. We welcome musical performances (in accordance with our theme
of medieval Spain–period or period-style works only, please) as well
as poetry, especially that written to honor the beauty and virtue of the
bride. Stories garnered from Mediterranean sources are also welcome. Clothing
from the period 900 to 1300 (especially Spanish or Near Eastern) is strongly
encouraged but not required. Please bring cushions, rugs, etc. to sit
upon as there will be no chairs provided unless personal conditions decree
them necessary. Note that this is a completely dry site, as it is an on-campus
function.

In culling data from an old Kates website, former Kates Chronicler, Dmitriy Shelomianin came across this set of data and images left there by a previous Chronithingie. These pictures provide a good sampling of SCA armor making skill and documentation of historical fighting cultures.

Immediately below is a series of pictures taken of three pieces made by Geoffrey Scott. 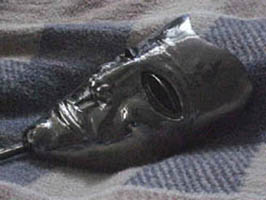 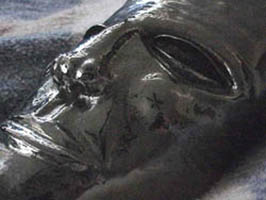 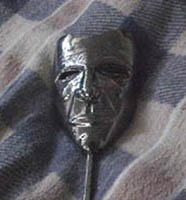 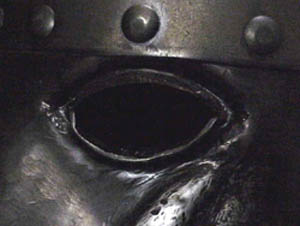 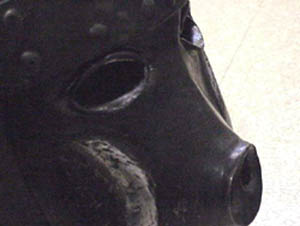 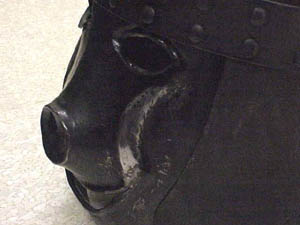 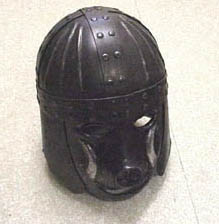 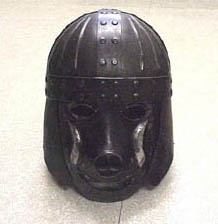 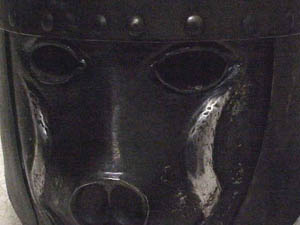 The following is a short summary of the article “Zolotoordynskie pogrebeniya
iz mogil’nika Olen’-Kolodez'” by K. U. Efimov, which appeared in Donskaya
Arkheologia, No. 3-4 1999. No ISBN is listed.

This summary concentrates on specific artifacts found in the two mounds
described in the article; much detail is left out for the sake of berevity
as well as respecting the author’s copyright. The reader is encouraged
to read the original article, should the reader be able to do so.

The Olen’-Kolodez’ mounds are located on the left bank of the Don river,
in the Voronezh district. Although they were first mentioned in an archeological
map by L.M. Savelov in 1902, they hadn’t been explored until 1996, when
despite the government protection of the site a construction company
started building a road through it. Six mounds were destroyed by the
construction work, and then inspected by a team of archeologists. Three
of them were nomad burials, two of which are described in detail by
Efimov.

These two barrows, #7 and #9, are burials of nomad aristocrats, a male
warrior who was buried with his weapons, armour, belt with golden plates,
and other items, and a woman (his wife?), buried with rich and highly
decorated clothing (very little of which survives) and various “feminine”
items such as scissors, a mirror, etc. Both are buried with stirrups,
bits, and other elements of a horse harness. The suggested date for
the burial is the end of 13th-beginning of 14th century. This article
only describes the items found in the man’s grave; the woman’s will
follow.

The man in barrow #7 was buried lying on his back, his head pointing
North-North-West. Near his head lay a rolled up maille shirt. It had
rusted together over time and its original shape could not be determined.
The diameter of the rings is 12 mm, with an oval cross-section, 15×20
mm (this is what the article says. I am guessing that’s a typo and it’s
supposed to be 1.5×2.0 mm). Traces of gold coating were found on some
rings. 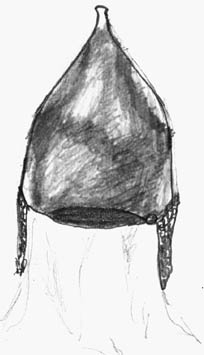 A helmet was found next to the maille (see figure 1). The helmet
is made of two welded halves, a conical upper and a cylindrical
lower part. There is a small brim on the front of the helmet. In
the top of the helmet there is a small 4 mm opening used for mounting
a feather plumage — traces of the feathers were found on the back
of the helmet. A maille aventail no more than 20 cm long was attached
to the sides and the back of the helmet by a 2 mm rod which was
laced through the top row of rings and then rivetted to the helmet
with 8 large rivets with semispherical heads. According to K.U.
Efimov, the aventail was fastened in front by an iron buckle which
did not survive. The helmet is 25.5 cm tall, and 20.8 cm in diameter
at the bottom edge.

A highly decorated bowl with a handle made to resemble a winged
dragon was placed close to the helmet (see figure 2). The band on
the side and the bottom of the bowl are etched with an herbal motif.
The hollow handle is made of two stamped silver plates, and finished
with etching. The corners of the dragon’s moth have holes, presumably
for a ring to pass through. A floral motif adorns the bottom of
the bowl. The bowl is 4.7 cm tall, with a 9.5 cm diameter at base
and 14.5 diameter at the upper lip. The top illustration is based
on the color photograph from the article; the bottom one is based
on the line drawing from the same. It shows more detail but is perhaps
not quite as true to the shape of the bowl.

An axe decorated with gold inlay lay at the feet of the buried
man. The axehead is 14.2 cm long, and the blade of the axe is 9.5
cm wide. The back of the axe features a geometrical pattern of triangles
on the two flat areas, and running animals on two other panels.
Both flats of the blades depict a stylized elk with two thin gold
lines around it. The top and bottom of the axehead also have thin
gold lines which run corresponding to the shape of the axe. The
hole for the axe handle is round, 2.6 cm in diameter. A 6.5 cm-long
section of the wooden handle survived. Its top edge is cut at an
angle that matches the angle of the blade. There is a nail hammered
into the top of the handle. The nail has a round, semispherical
head 2.5 cm long and .7 cm tall, covered in silk brocade.

A very rich belt was also placed in the grave. The fittings found
include a silver buckle, a belt tip, 3 large belt plaques, two of
which had loops on one side, and 9 smaller plates that were found
separateley, in the northern section of the grave. A small length
of the belt also survived.

Other items found in the grave (some of which are described in detail
by Efimov) were an arrowhead, an earring, an amulet made of green glass,
a 13 cm-long file in a wooden carrying case, a 23 cm-long spearhead,
a knife, a quiver, various elements of a horse harness, etc. Most of
these items speak to exreme richness of the buried man

Article Copyright 2001 Dmitriy Shelomin
Express permission is hereby given for reproduction of this article
for non-comercial purposes provided that the article is unaltered
and includes this copyright notice.